Getting money seized from your bank account by the authorities is an unpleasant surprise. This is the last resource though. Learn here how it works.
The Tax Office, the Social Security Dept or Local Tax Office can legally order an embargo to be sent to your account after trying to obtain the funds owed to them by other means without success. 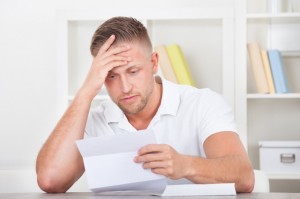 Before getting to that point, these agencies will try to:
*Depending on the Agency they can give you a second or third notification, including overcharges and penalties.
The problem that many people have is that they never get any of these notifications and only learn about it when they see the bank statement!.
This article is not to discuss the reasons for this: reliability of the Post, choosing to live in a remote area without an address, or living in a private urbanization where the post is not being delivered directly to each house….
The fact is that failing to receive the letter or not signing the registered letter does not stop the process of notification.  When they cannot reach the taxpayer by these means, they publish the notification in the official gazette (that nobody reads unless you are expecting something).
When an embargo is detected, the first thing to do is identify which agency ordered it.
The bank receipt possibly contains two figures:
If your balance was higher than the target amount, they will seize the full amount and you can still use the rest of the funds.
If on the other hand, you had less than the target amount in your account they will seize what they can and will continue to do so periodically until they have seized all the outstanding funds.
There is a period of time between the moment the embargo hits the account and “freezes” the amount and the moment the money actually disappears from your balance. During this time, if you put more funds in ( or get money transferred in this inopportune moment) they will “feed the avid embargo” up to the target amount. You can use the account normally after this until the next time ( if some debt remains)
There is nothing you can do to predict when an embargo will come ( or in which account). The system makes random attempts. You can be left alone for months and get two attempts in a few weeks.
The authorities do not make a distinction between business accounts, personal or client accounts. They will search for any account in which the taxpayer is a holder (only holder or co-holder) and set the embargo.
At this point, when you just see it on the bank statement, the attempt to embargo cannot be retreated except for:
The law says that when an extra tax payment is requested as a result of a revision process, the tax payer’s objection and the contesting letter does not exempt him from the obligation to pay. Only a favored result will do it.
If the payment has been done by the time of winning, a reimbursement must be applied.
*Official Payment Plan:
The Tax Agency and the Social Security Dept. allows for voluntary partial payment as a way to reduce the standing debt, but this is not an official payment plan in which the parties agree on terms, amounts and timing. The official payment plan is the only  arrangement  that would stop the embargoes.
Related: Installments or Deferred Tax Payment